After the Roman conquest of Gaul, the Emperor Claudius in AD43 ordered the invasion of Britain. The stronghold of British resistance on the Medway was overcome and the SE of England annexed. The Second Legion under Vespasian pushed south-westwards until sometime between AD43 and 47 Maiden Castle was successfully attacked as were the other hill forts of the region, Soon after these conquests our district settled down as part of a subject and peaceful Roman province with the new town of Durnovaria (now Dorchester) inhabited by the British residents evacuated from Maiden Castle.

From this new town the Romans drove a road south to the port of Clavinium – three miles of which now carries modern traffic to the Ridgeway. Ellis (p3) writing in 1829, states that there were evident traces of a Roman road at the base of the hill at Radipole. This fact together with:- (i) the opinion that a Roman causeway had more recently been found in the Broadwey churchyard, (ii) the possibility of the present highway from that point to Redlands having been built on a Roman foundation, and (iii) the frequent finding of Roman relics at Radipole, have led to the opinion that at some spot on the River Wey at Radipole may have been the port of Clavinium, but there is no hard evidence for the existence of this port.

In those days Radipole Lake was no doubt navigable and Melcombe hardly more than a sandbank – a probability strengthened by the fact that no Roman remains have been found between Dorchester Road and the present harbour, although some have been recovered from the Backwater. 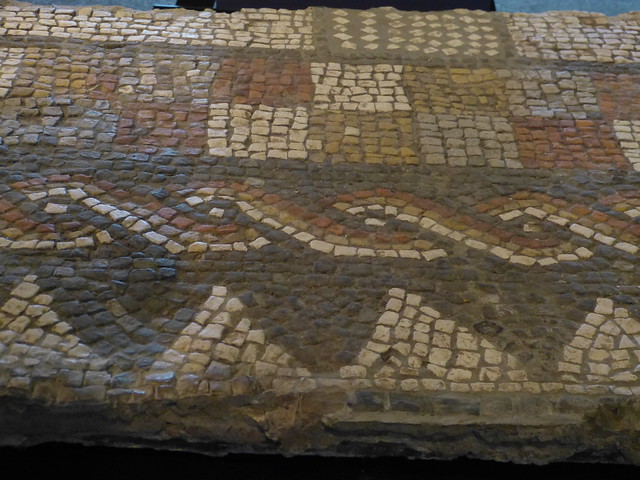 On the south side of the harbour there have been a number of interesting finds, e.g. a tessellated pavement on a site in Newberry Terrace, a quantity of unrecorded Roman coins from the higher end of that terrace, a Roman burial ground on the railway at Rodwell.

Unfortunately neither at Radipole nor at Weymouth has careful, systematic investigation followed the chance finding of such relics, nor does one hear of any advantage being taken of the present opportunity – made possible by the exploitation of Radipole Lake – to do more than make casual discoveries.

That Preston was inhabited in Roman times is shown by the number of remains which have been brought to light in that neighbourhood. In 1843 the foundations of a square building were found on Jordan Hill. The only records made by the investigator are unfortunately inadequate to determine whether the building had been a pharos or a temple. In 1931/2 Lt. Col. C. D. Drew re-opened the site and came to the conclusion that the building had been a Romano-British temple of an unusual type in that it lacked the customary veranda.

Another inadequately recorded Roman building – a villa with one tessellated pavement – was found about half a mile to the north-east of the temple in 1844. This site was also examined by Col. Drew, who, in the limited time at his disposal, was unable to make a complete investigation, but considered that the villa might be dated from the third century.

In August 1812 according to Ellis (pp 3 & 253) “an unbaked Roman urn filled with silver coins of various Roman Emperors” was accidentally discovered on the brow of Jordan Hill. The few specimens which he was able to obtain were of the mid 3rd century, a fact which may be of some significance since the hoard found in South Street, Dorchester in 1936 also consisted of Antoninianii of the same period.

On Jordan Hill a second large hoard of Roman coins – mostly late 4th century – was found in 1928. In his report on this collection Mr. F S Salisbury specifies many unique coins which he regarded as affording much useful evidence of the dissolution of Roman power in the western corner of their empire.

Incidental finds of Roman relics scattered throughout the Preston area increases the probability that there was her a considerable Romano-British population. (It should be noted that the small ad ancient bridge over the Jordan river just north of the present highway is misnamed the “Roman Bridge”).

During the 4th century the Roman Empire was so seriously assailed by barbarian tribes that Rome began to withdraw her troops from Britain for the defence of Imperial countries nearer home, until in the early part of the 5th century the rest of the legions left for the defence of Rome, the Roman Occupation came to an end, and the Dark Age in our national story started.

Recently there have been more finds from this period during the work on the Weymouth Relief Road.