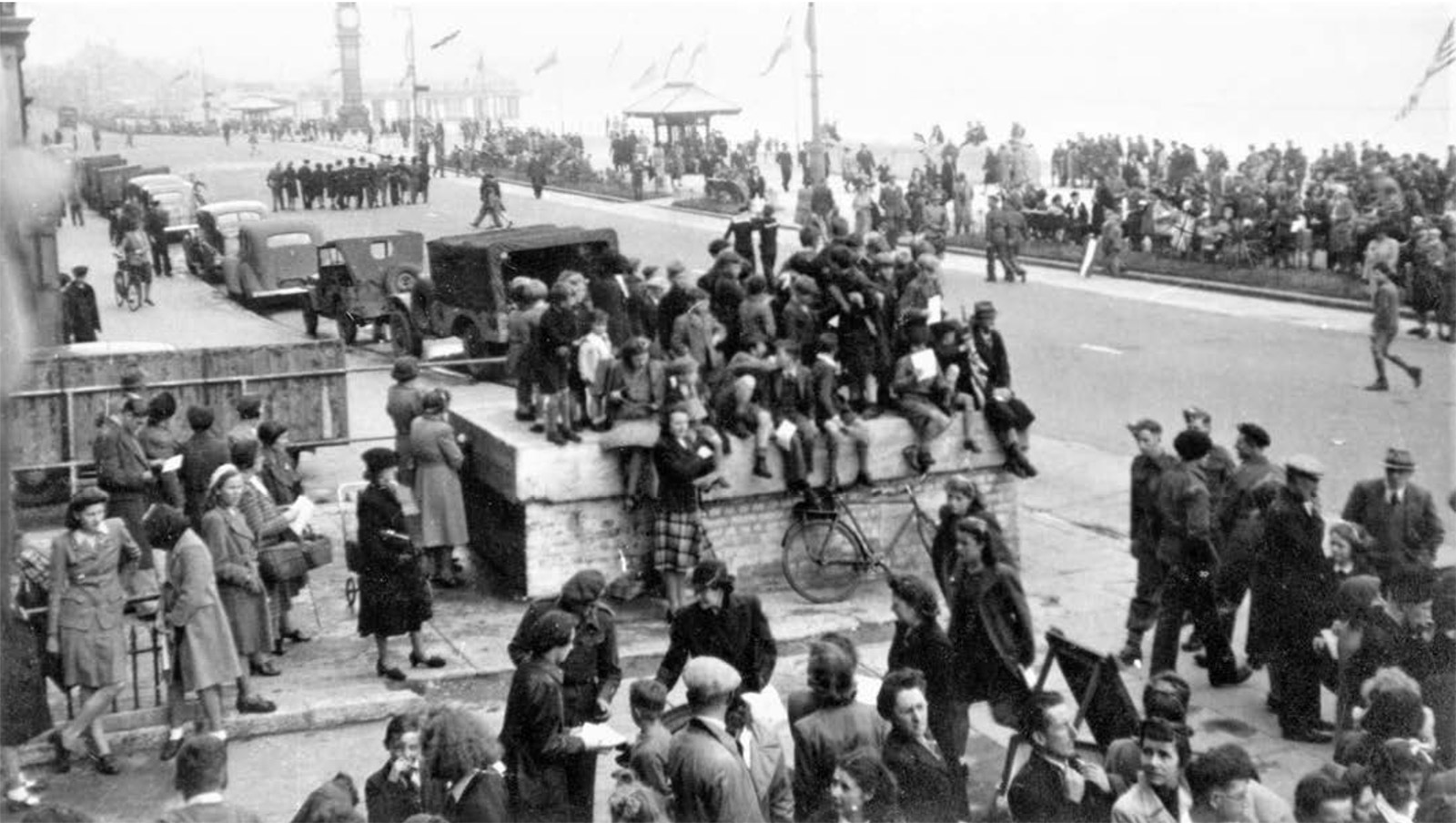 WEYMOUTH REALLY IS GAY FOR VICTORY

What was probably the most important day in the history of the British Commonwealth, perhaps indeed of the whole world, was celebrated at Weymouth on Tuesday with the traditional gaiety which goes with great occasions.

Overnight the streets had burst into a blaze of colour, for although the official announcement of victory had yet to be made, VE-Day had been appointed and its dawn was merely a matter of hours.

Early on Tuesday an army of Corporation employees invaded the Esplanade, and under their skilful hands a scheme of decoration soon took shape. Standing out from the other beflagged buildings was the Gloucester Hotel, a riot of Allied emblems and bunting. A dais was built in front of the hotel for the thanksgiving service which was to be held at three o’clock, and gay as a cottage garden it was, with laburnum and sweet-smelling spring flowers.

The Front was thronged with laughing, happy people, many of them wearing miniature Union Jacks, the girls with red, white and blue ribbon in their hair. There were lots of sailors in evidence, and as a party of them rolled along, shaking hands with all and sundry and calling out cheery greetings, somebody shouted, “Good old Navy,” and the cry was taken up. It seemed to find an echo from the sea. The atmosphere was charged with a feeling of supreme goodwill, the kind of feeling which, if maintained internationally in the years to come, may save us from another giant catastrophe.

In St Thomas Street and St Mary Street flags could be counted in hundreds. From the American Red Cross Club, jutting out from the smaller emblems, were “Old Glory” and the Union Jack, both at half-mast from President

Roosevelt. It was a nice compliment on the part of the American director to include ourselves in this mark of respect for one of the three great architects of victory. Across the street from the club, was flagged the Naval signal – VE-Day.

Of the decorated shop windows those of Messrs V H Bennett in St Mary Street, were particularly striking. A large figure of a soldier stood in the foreground of one, and below it was the caption “We have endured that you might live.” Behind were figures of British troops going into action. Flanking this set-piece was a wide streamer depicting a fleet of destroyers, going all out with smoke belching from their funnels. On the floor of another window was a huge red V bordered with narrow strips of blue and white, Britain, the USA, the USSR and China. Messrs Frisby’s had decorated their windows with red, white and blue sandals and socks, but Messrs Plummers struck a serious note, with a cross of diffused gold, beneath which appeared the words, “The light that shone through the darkest hour”.

As the day wore on people began to gather on the Esplanade for the thanksgiving service, and by the time the Mayor (Counc. JT Goddard OBE, MC), the Town Clerk (Mr Percy Smallman OBE) and the officiating clergymen had taken their places on the dais the assembled crowd numbered many thousands.

As the notes of Big Ben, striking three, broke on the air, the shouts and laughter and conversation ceased, and silence fell – a silence that felt almost tangible. And across the miles which separate Weymouth from London came the voice of the Prime Minister, relayed by loudspeakers that all might hear.

The National Anthems of the Allied nations were broadcast, the crowds joining in with fervour. The service was concluded with the Blessing, and as the last words were pronounced a little fishing boat moved acroos the bay, its red sail glowing in a shaft of sunlight, and somehow it seemed a symbol of that full peace which we hope so ardently will not be too tardy in coming.

The American Red Cross started their celebrations over- night with a film, “Hollywood Canteen.” It ran until 2.15am.

On VE-Day Mr and Mrs A Munro entertained a party of 14 friends to luncheon at the Clinton Restaurant. Among those present were Mr Percy Smallman (Town Clerk) and Mrs Smallman, and Mr Harold Joy, the accountant. It was Mr Smallman’s birthday.

On Monday Allied sailors climbed up some of the buildings and helped themselves to flags. The antics of a dog with a red, white and blue ribbon tied to its tail cause considerable amusement on the Esplanade. Eventually somebody relieved it of the unwanted decoration, and after a friendly wag it wandered away. Numbers of youths rendered happy by near-beer, wandered about the Front until the small hours singing blithely. Large policemen looked on tolerantly. There were no “incidents.”

Bryn Road, Westham’s VE-Day party with Mayor Goddard, who tried to visit all street parties, talking to Mrs Samways with Richard in his first appearance before the cameras.

The BW Club for the Forces, Chelmsford Street, celebrated in fine style, and both days will long be remembered by helpers and Service men and women alike. Large numbers packed the hall and rest rooms and festivities went on until eleven o’clock. There was certainly no shortage of food, for jellies and tinned fruit had been saved for many years for this occasion. Helpers were busy on both days, making trifles, jellies, cakes and pastries and all was free on both evenings. Capt and Mrs FW King were host and hostess on Tuesday and Wednesday evenings, and on Tuesday Mr Stanley Gundry was MC for games. Soloists were Trooper Evans, Wren Simpson and Miss Billett. There were monologues, and Sir Roger de Coverley and Grand Old Duke of York, and Auld Lang Syne closed the proceedings. The pianist was Mr Davies Williams.

Sidney Street Party: The residents of Sidney Street, Westham, celebrated VE-Day plus 1 with a children’s party, which was attended by the Mayor and Mayoress (Coun. and Mrs JT Goddard). A collection was made by Mrs Hayman and Mrs Hitchin, and the money was expended on cakes, oranges, sweets and lemonade. About 140 children and parents were present. A two hours’ entertainment was given by Mrs WJ Cave, Mr George Radmore, (the laughing comedian) and Mrs N Moore (vocalist). This was followed by community singing and games. The pianist was Mrs MacLeish. In the evening Mr Cave placed a radio set outside his front door and a large crowd was soon dancing to the music. Soldiers and sailors joined in the fun, and drinks and refreshments were provided. Two of the soldiers sang “Underneath the Arches” and “If you ever go to Ireland,” respectively, and the party ended at 12.30am with everyone joining in “Auld Lang Syne” and “God Save the King.”

The fair on the Marsh was in full swing, and as dusk fell was brilliantly lit up with scores of electric lamps. Dogs were done up like dinners, with rosettes and red, white and blue ribbons round their collars. Taxi cabs were in great demand, and the motto seemed to be from both sides “Hang the expense.” On both nights of the VE holiday the Pier Bandstand was crowded with a merry-making throng, singing, dancing, laughing, shouting, and not a little love- making. On VE-plus 1 day, dancing had spread to the Promenade, and the dancers were kept dancing by a series of jumping crackers, thunder-flashes, catherine wheels and other fireworks. In spite of a ban, a huge bonfire was soon blazing merrily on the beach. Later there were rockets, Verey lights and roman candles, lighting up the sky and the jostling throng. Two RAF officers, with three girls, came out of the Gloucester Hotel, all trying to get under an old broken umbrella held aloft by one of the officers. It was not raining at the time.

Nothing can shake our policemen. When some lads wanted to be friendly by shaking them by the hand they almost found themselves taken off to the lock-up. Our police however, certainly deserve a word of praise for the manner in which they conducted themselves under very trying conditions. Thousands of people took advantage of the free entrance to the Pier Bandstand. The Mayor looked in to watch the dancing, and most of Weymouth’s leading citizens paid a visit. One of the highlights of the American Red Cross’s celebrations was the arrival in the entrance hall in a jeep of the three programme directors, Miss Laura May Brown, Miss Alice Ray and Miss Hazel Herndon. The entertaining driver was Sergeant David Fink.