The Opening of the New Bridge 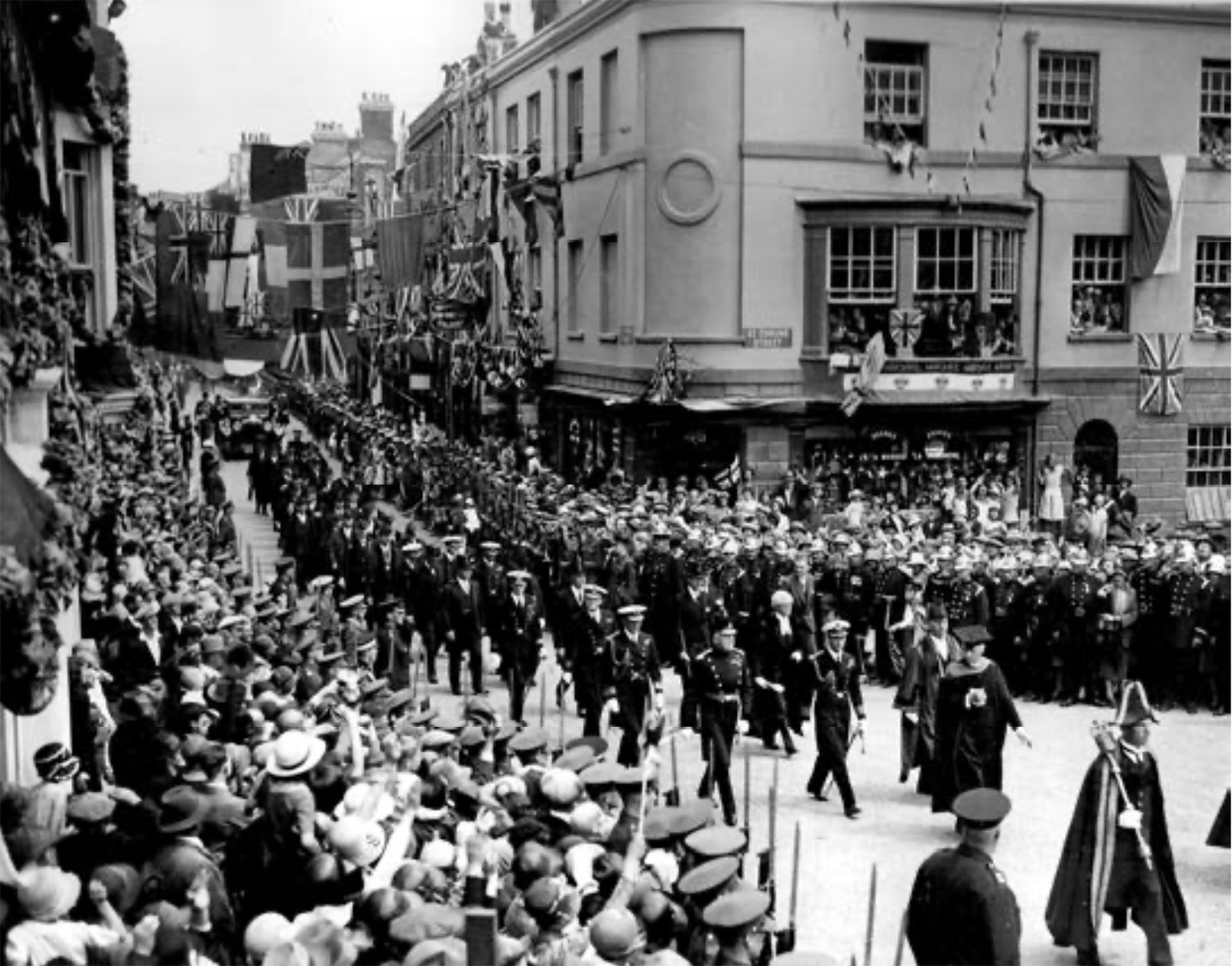 Weymouth Town Bridge will be 90 years old in July this year. While the construction of the bridge was a remarkable achievement, the celebrations for its opening were also a fantastic accomplishment. The Western Gazette noted that it was a day that would “ever stand out in the chronicles of the town’s greatest achievements”.

At exactly five minutes after noon on Friday 4 July 1930 two battleships anchored in the bay fired a 21 gun salute which thundered throughout the town. The Duke of York had arrived by special express at noon and was already travelling up King Street to the Esplanade. At the top of King Street was a triumphal arch, framing the blue bay and great grey battleships in the distance.

Immediately in front of the King’s Statue was an imposing red and gold grandstand where the future King was officially welcomed to the Borough. In front of the grandstand were ranks of sailors with fixed bayonets who had presented arms in exact synchronisation with the boom of the battleship. (The officer in charge having given the order on seeing the first flash from the battleships’ guns).

The five car motorcade arrived in front of the Statue and the Duke alighted and inspected the guard on honour. He then mounted the dais and received the various VIPs and dignitaries, including Mr George Barnes from Massachusetts. The Mayor, Percy Boyle and the Town Clerk, Percy Smallman were, of course, present, and the latter read the formal address of welcome.

I have been unable to find a single photograph of the arch or the ceremony at the Statue. I would guess that this was because every vantage point from the station to the south harbour-side was crowded with eager spectators, and any photographer who wanted a view of the grand bridge opening would have needed to have claimed their spots very early. (Edwin Seward who took the bridge opening picture in the second column had clearly found himself a window on Trinity Road).

At a planned 12.17 pm the Duke walked in procession down St Thomas Street which was covered from end to end with flags and bunting. He can be seen in the following photograph walking between the 9th Earl of Shaftesbury (who was Lord Lieutenant of Dorset) and the Mayor. Percy Smallman is directly behind the Duke.

After the Duke operated the machinery to open the bridge, there was apparently an expectant hush as the two 200 ton leaves rose slowly into the air. 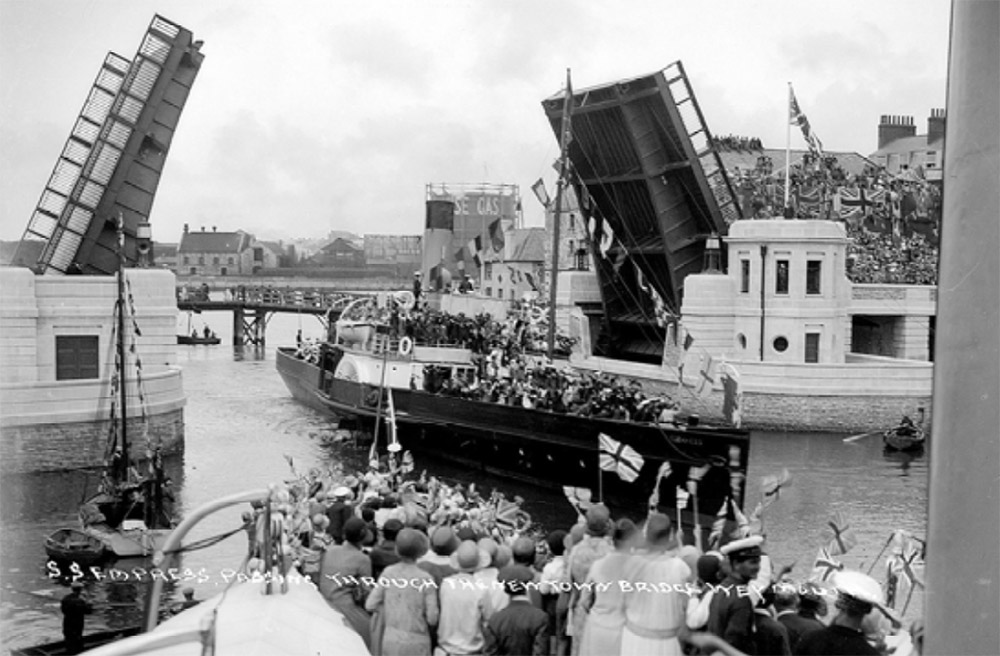 However, when they reached their highest point a great wave of cheers swept across the harbour. The first ship through was the Cosens & Co. steamer “Empress” packed with school children as can be seen in the second photograph. To the far right you can see the huge temporary grandstand that had been erected on the empty plot where Bridge Buildings had stood. Not only is this clearly packed but the crowds have extended to the adjacent warehouse roof. Health and safety was obviously not too much of an issue on that day.

Behind the “Empress” is the temporary footbridge that was in place during the building of the new bridge and, just out of sight, the lifeboat Lady Kylsant which followed it out. (Perhaps in case any of the school children fell overboard!). The Duke who had been standing by the roadside waving then re-entered the control room and the roadway slowly sunk back into position. After greeting the Harbourmaster he then proceeded to the south side of the bridge followed by a procession of the ‘Mayor and Corporation’ in their red and black robes. After releasing the chains in front of Holy Trinity church, he then returned to the north side where he declared the bridge open.

After lunch at the Gloucester Hotel, the Duke travelled to the Whitehead’s factory in Wyke Regis. There he reportedly took a keen interest in the manufacturing processes and, according to the Western Gazette, these “were obviously some of the happiest minutes of the day”.

In the evening, after the Duke had left, there was a banquet and ball in the Royal Hotel in honour of Admiral Hyde of the Australian Navy and George Barnes, the delegate from Massachusetts. Mr Barnes read a message of good wishes from the American President, Herbert Hoover. He also noted how satisfying it was to sit with his wine glass on the table rather than under it (since prohibition was still in place in the United States).

This was Weymouth still in its heyday. This was a day that should be remembered with pride, the like of which is unlikely to ever happen again.

Thanks to Richard Samways for his help with this piece and, for anyone who wants to know more about the history of the Town Bridge, I would strongly recommend his excellent booklet which is available from the museum shop.