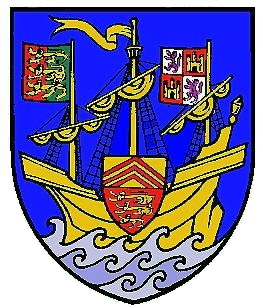 As most people familiar with the history of modern-day Weymouth know, the town was once two entirely separate and independent towns on either side of the River Wey.  It is thought that Weymouth was the earlier of the two settlements, emerging from a small huddle of fishermen’s huts and dwellings, sheltering under the promontory of today’s Chapelhay and the Nothe. Melcombe developed a little later on the flat sandbank on the north side of the river mouth.

From early times these two settlements were obliged to share the waters that lay between them, forming a safe haven, and which provided both towns with a steady income from shipping and fishing. Inevitably from as early as the 13th century squabbles arose between them over both the ownership of the harbour and the profits to be made from this shared stretch of water.

It is fair to say that Weymouth was by far the more belligerent of the two towns, asserting against Melcombe Regis, often with violence, what it saw as its rights. This unhappy situation flared up over the centuries until the reign of Elizabeth I.

It was in her reign that the quarrels between the two towns finally came to a head. Constant petitions to the Queen and her Privy Council led to her officials trying to broker some kind of peaceful agreement. Despite all their efforts, they failed.

Having run out of patience, the Queen and her ministers, used Parliament to bring about a final solution to this irksome problem. In April 1571 an Act of Parliament was passed forcing the two towns into a union by creating the new Borough of Weymouth and Melcombe Regis. In June 1571 a formal copy of the Act was sent to the town and still survives amongst the borough archives.

If they thought that sweetness and light would now break out, they were wrong. The people of the old town of Weymouth found it very difficult to accept the new reality and fought against it in one way or another for more than twenty years. It was the construction of the first bridge over the harbour in the early 1590s that brought about a physical union and strengthened the legal one. Indeed as the 17th century dawned people from the Weymouth side began to move over to Melcombe Regis where the flat ground was ripe for increasing development and thus prosperity. The centuries old animosities faded away.